Let us start from the very beginning of the slots history and consider closer the first crucial landmarks and steps notable in early slots game evolution.

It is common knowledge that hazard games have lured people since first ancient civilizations and primitive societies. Ancestors of various gambling games may be found in different countries of the Globe and across various nations.

The slot evolution goes back to the so called New Nickel Machines that emerged in late 1800s. First inventors of this game were Charles Fey, Theodore Holtz and Gustav Schultze - the masters of the electrical slots manufacturing industry. 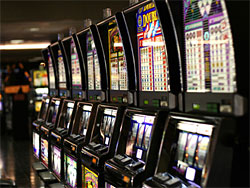 American mechanic Charles Fey was the first to construct and present first slots in the end of the 19th century. His child was named the Liberty Bell due to the following five symbols on the drums:

The First Slots with Symbols

The Liberty Bell was a 3-reel automated slot machine. It was extremely heavy and weighted over 100 pounds! After that slot machines became very popular and were in high demand among gamblers and entertaining establishments that installed them and enjoyed increased number of visitors.

In 1891 American residents from Brooklyn, New York Sittman and Pitt constructed and developed the first slots generation coin machine that had five reels with a total of fifty cards from standard playing decks. Poker card game was the base for this type of slot machines. From the very emergence of this gambling instrument it was a hot challenge for players since it was installed in every bar of the city and prizes were really tempting.

By the year of 1908 almost all saloons, bars, cigar stores and many other places contained "bell" machines produced and invented by Herbert Mills from Chicago. He named them Operator Bell.

Slot history has seen a number of manufacturers who imitated the original model. Thus soon after the first generation of Liberty Bell machines slots gamblers had come across a variety of alternative types, interfaces and rewards: diverse bar symbols, fruits, berries, and everything that was possible to imagine at that time.

Sometime after a new generation of quieter machines was constructed by Mills Company that named its creation a Silent Bell. It is necessary to note that in some time after the gambling world was enriched with series of distinctive cabinets: the Lion Head (1931), the Roman Head & the War Eagle (late 1931), the Castle Front (1933).