Survey of Events in the Slot Evolution 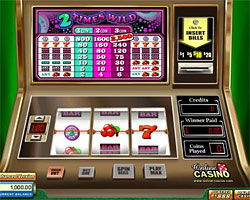 A Game of Luck

Slot machines are commonly referred to newcomers in gambling industry and there is a great deal of truth in it because the game requires no special training, intellectual efforts and other sophisticated skills. It has been observed that slots machines whether they are online or land-based attract a great number of gamblers worldwide with their decorative design and simplicity of playing.

Slot evolution brought he revenue of casinos from this game amounts to nearly 70% of the average total income because everything you need to do is to choose appropriate variation of the slots game and then enjoy the adventure.

But note that this game is quite insidious on the other side. Thus modern slots can empty your wallet in a few minutes. Remember not to stuck on this game and quit playing when you feel that the amount of money that was assigned for gaming is almost over. Everything is good within reasonable limits, even the world of gambling slot machines.

Slot machines have been in high demand among gamers since 1891. Charles Fey is considered to be the father of slots game invented in the United States. Slot Machines became extremely popular and had the call among people addicted to hazard adventures. His gaming machine was known as the Liberty Bell and contained attractive symbols instead of playing cards (the symbol of the Liberty Bell, spades, hearts, horseshoes and diamonds). Soon California State prohibited gambling activities and the use of automated gaming machines and Charles Fey had to look for new markets elsewhere.

First variation of slots machines was designed by Pitt and Sittman in the end of the 19th century. Their creation used typical deck of playing cards but two cards were removed from it. This slot machine had 5 drums and was based on a poker game. The operational principle was very simple: player had to put in a nickel, tug the lever and wait for the result of the spinning drums. The prize was depending on the establishment where slot machine was installed: it could be free drinks, cigars or something of the kind.

A range of slots symbols on modern slots roots back to slot evolution and early coin machines invented by Bell Fruit Gum company. If a player was lucky to win the game played with melon and cherry slots he could be rewarded with fruit flavored chewing gums and other sweets.

Nowadays a range of slot types allow gamblers to choose between land-based version and online regime. They can enjoy a great number of game variations (different video slots, various reel combinations, straight and progressive slots). The game interface is very different from one gambling website to another: celebrities, fruits, cards symbols, cars, cartoon heroes, and everything you can imagine is utilized in different slots adventures. Your task is to choose the best juicy combination and enjoy the ride!