Slot History: : What are the Landmarks?

While a number of casino games have similar components, characteristics and other features throughout the casino history, slot machines differ with their uniqueness and specific traits. However, even if to consider the growing popularity of various slot machine games that significantly increased in the beginning of the 21st century, most people who are involved in playing slots know so little about its progress.

The slot evolution starts with bar games and their inventors which simply added cards or illustrations on the drums and applied a level that started the game making the drums spinning and keep the player in excitement till the result is evident. If the player had 3 similar symbols he could happily claim for rewards and get cigars, drinks, food or something of the kind. 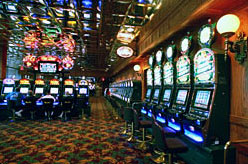 The first outstanding German mechanic who immigrated to the United States made his mark on gambling history and invented the unique Liberty Bell machine. You may ask why it was unique and what its absolute significance was. The answer is quite simple: firstly, this type of slot machine was the first to remunerate the winner with real money, and secondly it replaced standard deck of cards with five symbols. The name for this automated machine was given in accordance with the symbols printed on the 3 drums: diamonds, spades, hearts, horseshoes and, of course, the Liberty Bell symbol.

The Period of Liberty Bell Copies

According to the slot history in the year of 1907 Charles Fey made his mind to cooperate with the Mills Novelty Company that manufactured their version of the original Liberty Bell. It was called the Mills Liberty Bell. The drums of the machine displayed the playing card symbols of King, Queen and Jack. The machine also equipped with a bell made noise when a player was lucky to get the winning combination (later it was removed). The fundamentals of this machine design are still utilized for all modern slots.

In 1910 the Mills Novelty Company produced another version of slot machine that was much lighter in weight and renamed it to Operator Bell. It differed from the previous version with fruit symbols on the reels and coin deposit slot. Over 30,000 of these slot machines were released and it is worth mentioning that all of them were in great demand among gamblers from various regions.

In 1915 cast iron machines were replaced with alternative wood cabinets that were less expensive and easier to construct.

The Age of Silent Bell Machines

In the 1930s a number of changes were made to slot machines. Those included the removing of (Silent Bells), double jackpot (opportunity to win twice in a row, the design of slot machines became more colorful and attractive. Some cabinets were given pompous names that evoke a feeling of power and chic: Lion Head (early 1931), War Eagle & Roman Head (late 1931) and Castle Front (1933).

At the Peak of Popularity: Novelties

In the 1950s the slot history resulted in electro-mechanical machines. This was the peak of slot machines popularity. During this period gamblers received another gambling innovation such as Big Bertha (later the Super Big Bertha). These slot machines were installed with a five horse powered motor and eight reels with 20 symbols per each reel and suggested 80 percent payback to gamers.

Another electro-mechanical achievement produced by Bally Manufacturing in 1964 was called Money Honey. It was completely different in outside cosmetic design and electrical elements that replaced springs and levers. Innovations allowed exciting sounds and glimmering bright lights during the game session and of course when a player used to hit the jackpot.