Meet the Ancestor of All Slots Machines: the Liberty Bell

Definition of the Term

Slot machine is a gambling machine that is installed in land-based casinos and is operated with help of the lever or button. This gambling instrument consists of three, five or seven reels with various symbols on the drums. When player tags the level or pushes the button reels began to spin while you wait for the desired jackpot. Slot (the name of the game in America) or coin machines are also known as fruit machines in Britain, poker machines in Australia and the slots in Canada. They can be as well called one-armed bandits because after playing the game you can stay cashless. Many up-to-date slot machines have both lever and button in order to preserve the gambling traditions and make the machine look more attractive. 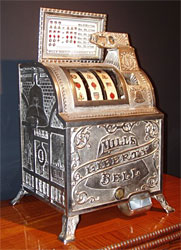 Charles Fey and his Creation

Charles Fey is generally presented as the inventor of slot machines. He was born in 1862 in Bavaria, Germany. He was the youngest kid in the large family that consisted of fifteen children. Since he was 14 years old he began to investigate various mechanical devices and tools. A year later he moved to France and started to work as equipment manufacturer. After that Charles travelled to London and executed duties of a nautical mechanic.

At the age of 23 Charles decided to immigrate to the US. In California he started new life and was hired by electric company. Here he met Theodore Holtz and together they started their own business that involved manufacturing electrical equipment, telephone and telegraph. The demand for gambling adventures was boosting and in 1895 Charles introduced his creation that made him famous: a Liberty Bell with the winning combinations. The automated device based on beloved lottery game known as "Policy". Huge amount of success and high demand for this machine gave a chance to Charles Fey to found Machine Factory in 1896.

The invention of first slots machine named Liberty Bell in 1895 in San Francisco started new revolution in the history of gambling. There are already existed similar coin machines that imitated popular at that time gambling game - poker. Those slots rewarded winners with chewing gums, cigarettes, drinks and other prizes.

Unlike existing "poker machines", the Liberty Bell suggested money rewards for winners. It was the first slot machine with 3-reels and 5 symbols on them: horseshoes, diamonds, spades, hearts and finally liberty bells. In order to start the machine player had to insert coin and pull the lever, reels and symbols began to spin and the gamer took his breath awaiting the desired jackpot. If 3 certain symbols appeared on the payline, the gamer enjoyed the victory. As a rule the Liberty Bell rewarded a winner with a 50 cents payout.

The Liberty Bell machine was imitated and updated by a range of Charley's followers. They diversified slot types by adding bars on the reels, renewed the look of the machine and its functions and introduced other additional features. Thus the Liberty Bell is hopelessly outdated, but it will be always essential for the casino gambling history.